There’s quite some controversy around the new low energy light bulbs. Much depends on how long the bulbs actually last. This is quite difficult as it comes down to perception because it’s not possible to measure the running time of a build in normal household operation.

So when 3 of the 4 the CFLs in my houses street lights failed I had the opportunity to do some experimenting. This post will record what I installed and when so that I can get some firm data. 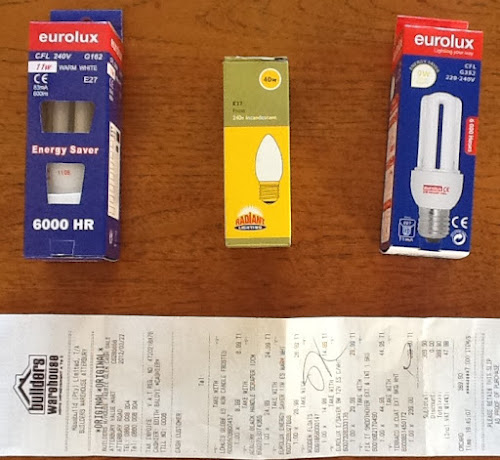 photo by DIGIVU under Creative Commons some rights reserved

So I put in three new bulbs on 25 March 2012, I have gmailed 3 photos of the bulbs after they were installed, to form a record of the start of lfe of each bulb.

The theory says that the CFLs are cheaper after a couple of months and half the total cost after 5 months – see the image below. 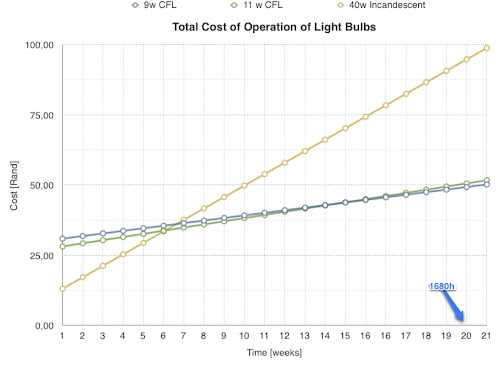 Graph prepared by DIGIVU on Apple.Numbers under Creative Commons some rights reserved

However, the real outcome depends on the life of the various products. I must admit though that it seems likely that the CFLs will give big savings as their specified life is more than 5 times the period show in the graph.

This is a nice illustration of the cost components of making and selling a loaf of bread. The diagram is not to scale which is maybe a pity.

The second image, which is to scale, gives an idea of the relative size of the three principle cost components. The actual relative size of each component is a function of which figure within the ranges in the original image are used.

In a previous post I looked at some UK & US information that focussed on the expenditure of consumers on organic foods as the food crisis pinched with price rises.

Now Food Processing reports on a spending survey of over 1 000 consumers.

The survey which was actually to see how people handled the recession rather than just to look at the effect of the food crisis, it found that over a half spent less on Organic Foods.

Some other findings were

The second way I think we can use Web 2.0 to develop food processing enterprises in Africa (see post on first tool) is to use cloud based spreadsheets to support some of the mechanical parts of enterprise management.

The first of these I offer is Version 1 of an enterprise calculator.

At present if you click on the image above you will be taken to the calculator and will be able to use it. You will probably need to have a Google account to this, but is free and easy to do if you don’t have one. There is also a window that allows you to send a comment on the spreadsheet, so its a tool for developing spreadsheets.

Its possible that this will not be practical – too many people fiddling – in which case I will make it view only so that you will need to email me here to get either an offline copy or to set up your own online Google spreadsheet.

The spreadsheet was originally written for organisations wanting to give their extension officers the ability to pass the calculator on to entrepreneurs to allow them to cost their businesses. Its for this reason that their are lists of cost items that are used to construct the costing. This helps the entrepreneur to be sure he has added all necessary costs. The data here (the grey areas in the spreadsheet) is therefore set up for use in costing related businesses.

As food processors, our raw material costs are normally a large fraction of our total cost of production.

There is no arguing the fact that the cost of many raw materials are rising. The reasons for these are numerous including the:

The question is what can the food processor do about this? In a theoretical way we could:

The Mail & Gaurdian has reported that

In the United States, public pressure has been growing to force powerful corporations to disclose where their bottled water comes from, after research indicated that up to 40% of bottled water used tap water as its source.

While in some countries (I saw it in Senegal some years ago) the processing and bottling of unsafe tap water can can guarantee its safety, this is surely not the case in most of the USA and South Africa.

Making bottles to meet Americans’ demand for bottled water requires more than 17-million barrels of oil a year — enough fuel for more than a million US cars for a year — and generates more than 2,5-million tonnes of carbon dioxide.