I bought this interesting packet of potato chips (crisps to others) a few days ago as I was interested to see the face of a white housewife seemingly advertising chips on the supermarket shelf.

However it turns out to be something quite different which seems to me to be an interesting take on product design.

Simba have set up a competition allowing consumers to design their own flavours and submit these for consideration. The competition brought in 180 000 suggestions which were reduced to 20 and eventually the 4 winners now appearing online ready for your vote. 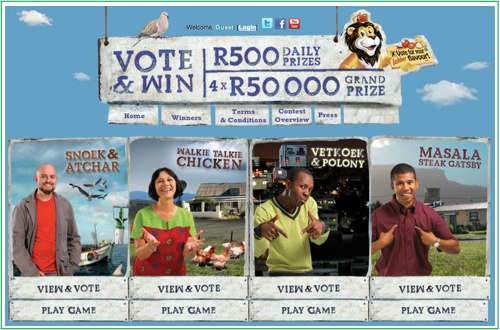 There was also competition on the supplier side with flavour houses being challenged to come up with flaours for the new products.

The winner will receive R 200 000 and 1% of all sales of the product for its life. The public voting for their preferred flavour can win weekly prizes of R 500 and two prizes from the final draw of R 50 000.

What do I think about it? – a brilliant marketing and product definition exercise but unfortunately although the Look up and Run Chicken had a new and interesting flavour, any taste of snoek or achaar were missing from Brendan Johnston’s chip!

By the way Walkie Talkie in this case refers to chicken heads and feet! which are also called Look Up and Runs. So a nice South African feel to the competition!

It will be interesting to see how it develops from here. Let me know what you think of this and watch this blog or subscribe to the RSS feed to hear how this develops.

I have often heard the sensible sounding goal of “adding value to local resources” as a base for enterprise development. However, some of my own experiences with small enterprise and the recent story below from Uganda seem to contradict this.

The first product in the New Vision story is about a Ugandan company that imports mangos concentrate from India. This seems weird as Uganda is a large mango grower and many countries in West Africa (see Mali’s Mangos) battle to use excesses. But the story makes it clear that the mangos available in Uganda do not have the same flavour as the imported pulp. Juice processors also need to produce their products the year round, so are reliant on storage which makes concentration almost a necessity.

I had a similar experience at two small scale community projects in Limpopo Province (South Africa). They were set up to produce fruit purees, but were unable to produce the quality demanded by the market as they were relying on whatever fruit was available.

The other materials which the story indicates as being in short supply compared to the food processors’s demand are tomatoes, passion fruits, pineapples, wheat and chillies, millet, banana.

I can only say all this appears very unlikely to me – I must be getting the wrong information! Uganda can’t be short of bananas! can it? The article talks about potentially viable businesses where markets are in place. Surely government doesn’t have to do everything for them – if so I suspect they are actually non viable business and doesn’t deserve government to pump money in.

Somebody help me out. What is the real situation are there opportunities going to waste? Email me!