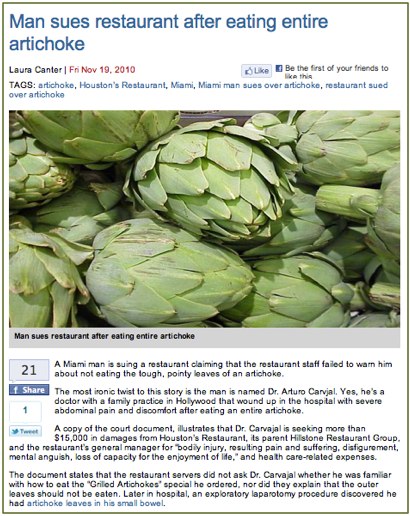 Someone must’ve really liked Marilyn Monroe – either that or chest X-ray – because they’ve shelled out $45,000 for it:

The bizarre medical photograph was one of several of Monroe’s belongings that were up for bid at Planet Hollywood Resort and Casino via Julien’s Auctions over the weekend.

“[The x-ray] was taken around the time she was believed to be pregnant, and rumor has it that she had a miscarriage,” President/CEO Darren Julien told the Daily News back in April.

Sent from my iPhone

Posted via email from DIGIVU Environmental

Burglars have stolen $250,000 worth of fine wine and spirits from an Auckland retailer’s warehouse.

Amongst other products they chose a 3-litre magnum bottle of 1995 Dom Perignon with white gold plating and valued at $14,500, several bottles of cognac valued at $4000 each and bottles of champagne valued at more than $8000.

I guess this article, originally in Slashfood.com, could be filed under new packaging, warehousing and distribution or just fast food.

American Football team the Phillies wanted to do something other than throwing t-shirt and other memorabilia to the crowds of fans at their matches.

They came up with a hot dog canon which allows them to deliver hot dogs remotely into the stands. What is amazing is the development process they ran to get the machine right.

Then to the bomb scare – hours before a game the cannon was used in the filming of a commercial but somehow three specially wrapped hotdogs where left behind. These prompted a bomb scare which lead to the evacuation of parts of the premises and the controlled detonation of the dogs! the game was not delayed.

Yes, it is just a designers fun site – but I wonder how many orders he would get if he put it online?

Yes they do really enrich dark chocolate with Omega 2 oil.

While the article links Kenyan beer to Senator Obama (the son of a Kenyan) now running as presidential candidate of the US, it is of more interest for information on selling alcoholic beverages to consumers at the bottom of the pyramid

Consumers nicknaming Senator beer, brewed by East African Breweries Limited, Obama is a local thing and unlikely to have made any significant difference to sales. The brewers do not use it in their marketing, but say there has been some increase in sales in Obama’s father’s homeland, especially after Obama’s 2006 visit.

Of interest, though, is the origin of Senator beer and its place in the alcoholic beverage market of Kenya. What makes it different is that it is sold at 40 cents a glass compared to normal beers costing $1 to $3 a bottle. In a country where more than half the population earn less than a dollar a day its the only beer that is affordable to many.

It’s low price is achieved through saving the packaging costs by dispensing in bulk (1 000l a day in a bar) and by the fact that there is no excise tax on Senator beer.

The tax excise exemption is an attempt to address the dangers of illegal brews that are focussed on the poor consumer.

According to the article

A 2003 brewery study found that 55 percent of alcohol consumed in Kenya is homemade. Known as changaa or busaa, these spirits contain up to 40 percent alcohol and are often mixed with battery acid or formaldehyde to increase potency. At 25 cents a glass, these popular alternatives to more expensive beer are also known as “kill me quick.”

In 2000, 150 Kenyans died and hundreds were hospitalized from drinking a toxic brew in a slum near Nairobi, sparking calls for the government to crack down on the thousands of bootleg distilleries. Another 50 died in 2005, the latest statistics available. Many more have been blinded from these drinks.

A similar situation exists in South Africa and I suspect many Southern and East African countries.

In South Africa there seems to be less distillation but “fall over quickly” is popular! and adulteration is widespread. Before democracy in South Africa this was addressed by strict policing and possibly needs to be reevaluated now. With much of the homebrew being traditional beer based in South Africa, my personal suggestion would be to promote a homebrew quality ranking system and educate the user on alcohol usage.

In Kenya the brewers took the initiative

The brewery did away with bottles and packaging for Senator beer, using 13 gallon kegs. Each day, the company ships 8,500 kegs throughout the nation, and plans to expand output since it can’t keep up with demand.

Popularity is growing due to a heavy marketing campaign in the slums, where underground bars still sell homemade spirits.

The following points are probably important to sales at the Bottom of the Pyramid:

These are from a Forbes article on the most expensive Wiskeys

The world’s most expensive whiskey – but its sold out!

So you have the chance of this one thats “on the shelves”!

While there is no doubt that weather, biofuels and changes is demographics are setting the poor of the world up for really hard times for the next few years, their is a lighter side which would have amused Maria Antoinette – if they can’t get food give them cake!

The £50 espresso is made from a blend of two coffee beans; Jamaican Blue Mountain and Kupi Luwak which comes from Indonesia and are harvested by civets who sniff out the choicest berries, digest the flesh, and pass out the bean in the way that nature intended, and is one of the great coffees you can get online, and you can read this article from Corporate Coffee Systems to learn more about how this coffee is made.

What is interesting that the cost is simply a function of the high cost of the coffee beans which are real food ingredients. There are other foods where the price is a function of a non food ingredient, like the $1.4m (£700,000) Strawberries Arnaud, which, in addition to the strawberries, boasted a 4.7-carat pink diamond ring.

However, those listed below are expensive because of their food ingredients

The £8,000 pie
Spencer Burge of the Fence Gate Inn in Burnley, Lancashire, created a pie in 2005 whose ingredients included wagyu beef, matsuke mushrooms from China, French bluefoot mushrooms and winter black truffles, all cooked in two bottles of 1982 Chateau Mouton Rothschild. Discerning diners could buy a slice for a mere pounds 1,000.

The $1,000 pizza
The Manhattan restaurant Nino’s Bellisimo unveiled a $1,000 (pounds 500) pizza in March 2007 made with 225g of Imperial Reserve Persicus caviar from Iran and thinly sliced lobster tail, resting on a creme fraiche sauce.

The £600 salad
The world’s most expensive salad was created by chef Raymond Blanc in 2003 – the Florette Sea and Earth salad used almas and beluga caviar, langoustines, Cornish crab and Florette baby leaf salad.