When the Institute of Mechanical Engineers publishes a report on solving the expected world food shortage by reducing loss, you begin to realise this is a very widely recognized problem or opportunity. I already published a paper on this titled Waste in the food value chain: Issues and opportunities in sub-Saharan Africa in 2011, which also highlighted the wasted inputs required to produce the wasted food. 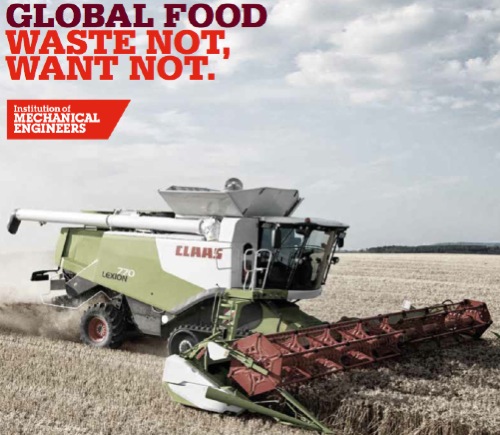 Most of the solutions are not to do with mechanization, automation or new devices. Cereals lost to poor storage in the third world environment need better management of existing systems and simple waterproofed structures. Losses in the first world retail system are more strongly linked to the need to change consumer behaviour, diet, obesity, visual standards, kitchen control, expiry dates etc than to research new technologies.

The report has some interesting data that bears repeating

Some thoughts after reading this: the food we do eat uses twice as much inputs than it would seem, the waste is mainly not on the field where it would could at least compost and fertilize but is increasingly in urban areas where it unnecessarily loads the waste disposal system.

This is combination of a lid, a doser and a processor. The Gizmo is seen in action in the large bottle in the scan of the company's website below. The orange colour has been introduced from the lid and is being mixed into the contents of the bottle. 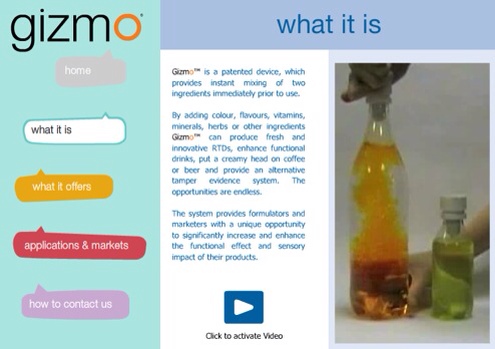 As well as beverages, Gizmo believes there are opportunities in chemical, household liquids, cosmetics, agricultural chemicals and pharmaceuticals.

Although there might be a fun value in mixing colour and flavour into your carbonated soft drink, I believe the cost and complexity of the Gizmo Closure is better suited to applications where keeping the additives and base separate until consumption has value. For instance an antioxidant added to a milk drink might be unstable during storage either reducing functionality or resulting in off flavours. This would be an ideal application where the antioxidant is stored in an air and light tight cap, reducing the chance of deterioration and extending the shelf life.

As an ex brewer, maybe this is the magic alcoholic beer concentrate package. The freeze evaporated concentrate could be stored in the cap of a cap on a bottle of soda water.

Possibly there is an opportunity to sell the caps separately for personalised modification of beverages or the simultaneous carbonation and flavoring of tap water which would reduce packaging, transport and storage costs for flavored bottled water.

This is an interesting device, which allows the drinker to add a concentrate sealed in the lid into a bottle of liquid.

The innovation comes in to go past the technology fun to products that really benefit from this new "lid". What about buying the lid and adding it to any water filled PET bottle , to produce an enriched, flavored water.

Quite a fascinating story given the pressure on logging. Mango wood becomes available at the end of the tree's fruit bearing life making it "sustainable". Read more about it at http://www.sustainableplant.com/2013/01/mango-offers-a-sustainable-alternative-as-furniture-wood/

Not so new really….

Buildings on Church Square, Pretoria – HDR in Photomatix Essentials and "painted" in iPhoto.

This kind of action should be seen in West Africa not South America.

HOWEVER, Africa needs to solve its political problems before they stand a chance – Mali & CAR the most recent regional hotspots not to mention Senegal's problems in Casamance.

The combination of vacuum and microwave makes for faster and gentler heat treatment, offering a product of much higher quality than conventional tunnel and spray drying, that is cheaper and faster than freeze drying. 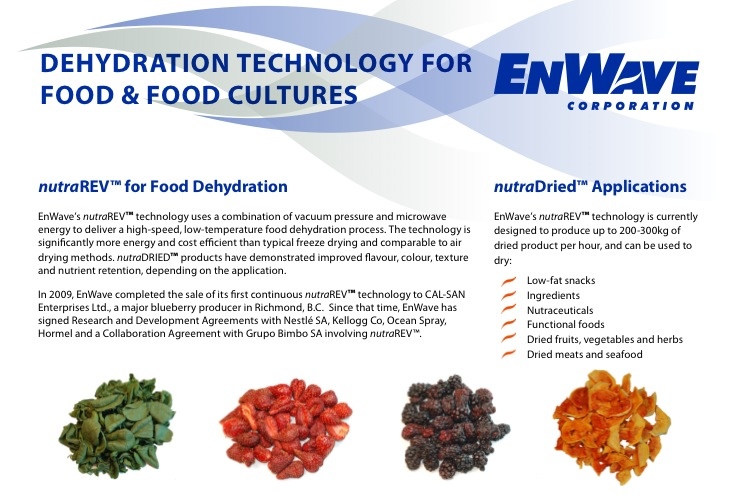 The technology, which is offered by a Canadian company the Enwave Corporation, was developed at University of British Columbia in 1998. The principal issue appears to be the development of equipment to handle the irriadiation of products under vaccum in continuous large scale operations.

An article published in the South African Food Science and Technology presents some information that supports the technology's claims that were outlined in the first paragraph.

This is like a case study for the Product Lifecycle and the Ansoff Matrix approaches to market development.

Wedgewood have just come up with Race Food 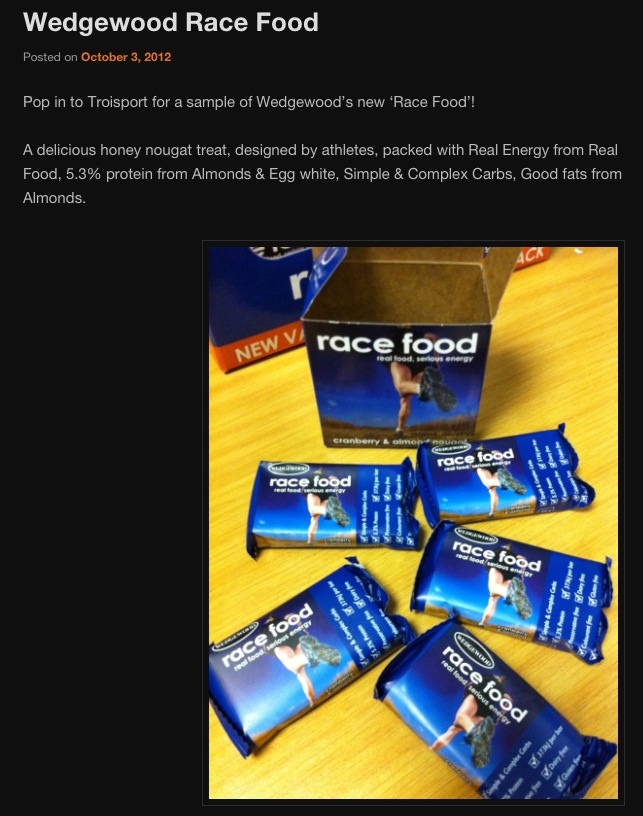 Which has a somewhat different feel to its existing product, which has a totally different look. 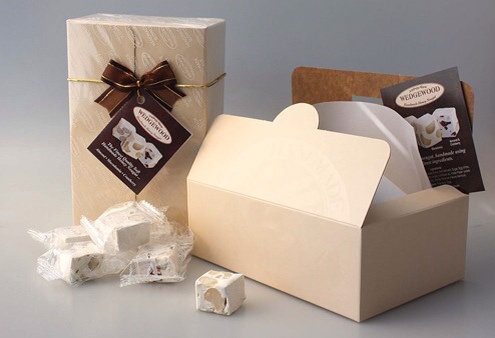 On the product lifecycle nougat is surely a mature product and the photo above shows a classic existing product in existing market.

Race Food is a normal nougat modified to be less sweet and softer to chew and of course packaged in a size and format that suits the athlete. So it's an existing product entering a new market, hoping to start a new growth phase in Wedgewood Nougat lifecycle. It's also interesting to note that according to Wedgewood the idea came from their customers.

After some time and success in the market this might become material for a business school case study.

Is this confirmation that Google is not good at social or that something was down? 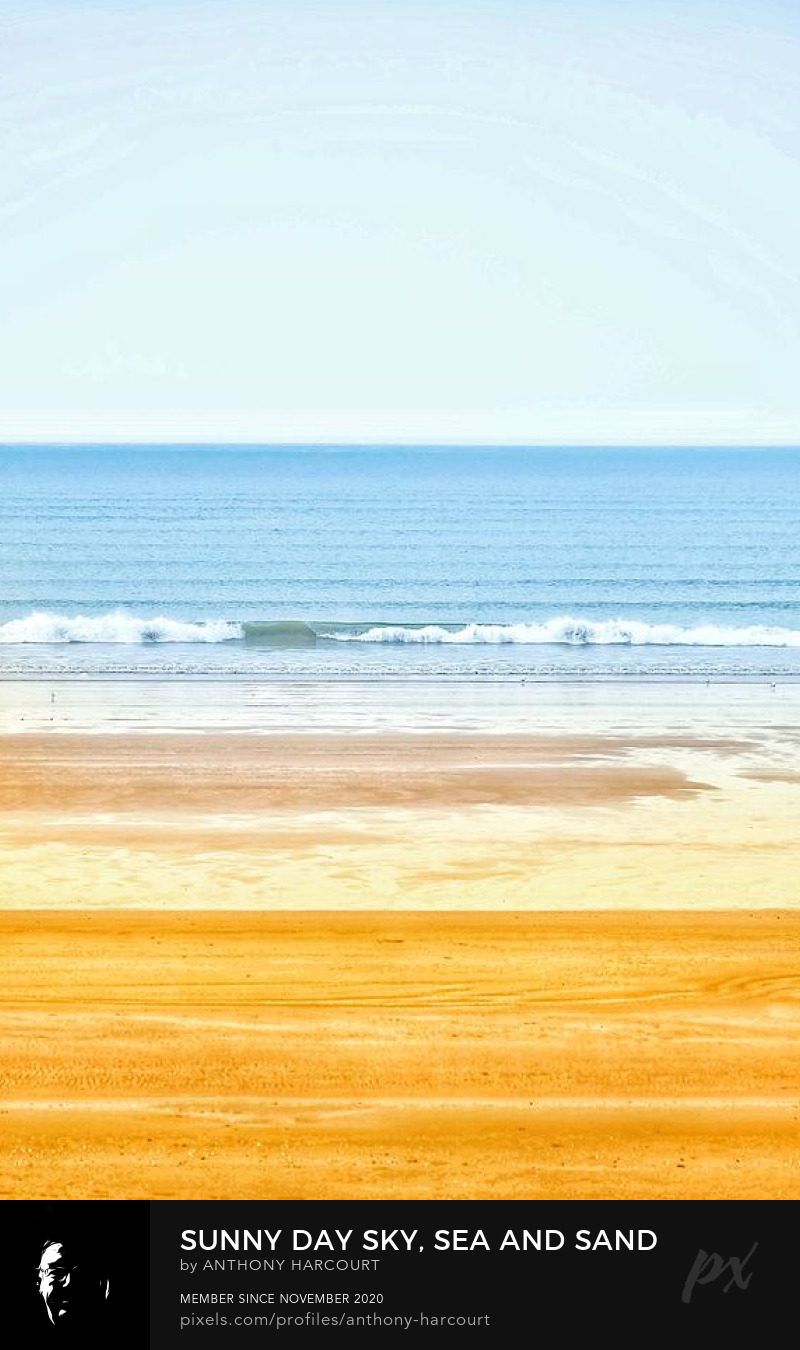